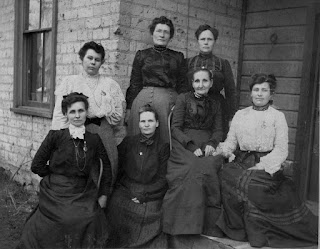 When I was about twelve years old, my father began dating a woman who would become his wife. On our first trip together (when I was actually spending some time together), we went rafting and camping. I was fiercely attached to my dad, was a grouchy twelve year old (I know...hard to believe...lol) and, frankly, I was not thrilled that he was serious about anyone...

Anyway, long story short, after a flipped over raft (with her and my father in it), a hysterical twelve year old (I know...hard to believe...lol), and a bunch of soaking wet people, she (off the cuff) invented the Pioneer Women's Club. She explained that in the olden days, women were required to be brave and conquer hard situations. Sometimes things didn't work as planned, and Pioneer Women would work hard to make things better. She explained that we were like Pioneer Women in this situation. My twelve-year-old self bought into the story, making us part of a club that now sports members that include all the women in our family and extended family.

I bring up this memory because these last few month have been filled with ups and downs, twists and turns. I have moved into an apartment and am rebuilding a life. Not having Javad with me is hard, but the most loving thing I could do for him is keep his life as unimpacted as possible. It is the greatest gesture of my heart.

Today my sister came by to drop her oldest off to get some homework help and she and both my nieces took the tour. Once we had walked around, admired the view, talked about storage, etc, my youngest niece asked me if Javad was there. I quietly said to her that, no, he was still at the house with his dad. She responded, "That must be hard.." Never were four words more truly spoken. My sister looked at her and said, "Yes, remember though, she's a Pioneer Woman."

Through these times, I am comforted by the thought that I am a part of this clan...I proudly will say, "I am a Pioneer Woman."
family Pioneer Women's Club