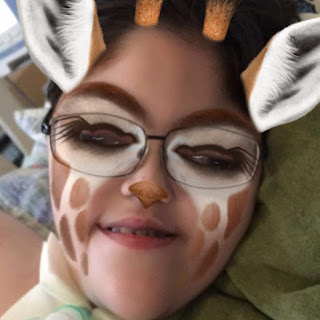 My sweet giraffe boy just celebrated his 16th birthday. Although Javad shook his head "no" every time I asked if it was his birthday, I assured him that it was indeed his day since I had been present sixteen years earlier for that ever so epic day. When I think back to that day now, I realize what a fog it is...blurred images like a watercolor painting in the rain. The joy of entering the hospital, welcoming a new member of the family, to the chaos and wondering of the next steps. I remember laying in the operating room, waiting for the scheduled C-section, hearing the doctor pronounce that "It's a boy," then nothing. No sound coming from my sweet boy's lungs, silence except the doctors talking. My questions were answered in vague ways before they injected me with Morphine and I went off to slumber land for the next hours.

While I was sleeping, much discussion was happening, looking at his lungs, putting him under an oxygen tent. The hospital where he was born was epically under-prepared to care for a baby this sick. It's a wonderful hospital, but prepared for preemies and regular births. Javad was way out of their league. After 24 hours, all the doctors agreed that he needed to be moved to a place which could help him more. We were sent to Emanuel Hospital where he was placed in their NICU. My sweet grandparents, already in their mid-eighties, were coming to see him that first morning and witness a "drive by" of the sweet boy in the Superman-like pod that he was being transported in. They gushed over his looks and said a quick prayer over him. Always Javad's cheerleaders, they sent their love and strength with him.

Apparently on his way, he stopped breathing but arrived at Emanuel ready to be assessed, doctors primed to figure out what was going on with this sweet boy. By the time I got there, hours later, they had already crossed things off their list. By the time I reached the hospital, I was exhausted, having had major surgery the day before, worried and in pain. My cries of agony when the doctor came in saying they didn't know what was wrong, filled the room. The release of this pain, on the other hand, helped me to find my focus, which would carry me through the next 13 years.

We spent three weeks in the NICU. When we left the doctors and nurses gathered for our send-off. I believe that they were sending Javad home to die. I didn't see it then because I had blinders where Javad was concerned, but now, years later with all the medical knowledge I have, I see it. I have often felt like it was the scene from Princess Bride when Mad Max says "Have fun stormin' da castle!" "Do you think it will work?," says his wife to which Max replies, "It would take a miracle." This is why this birthday, his 16th became unexpected.

I have always know in my heart that he would be okay. Yes, there have been times when I suddenly realized that he may not survive, once when he was two and he coded in the ER. A frantic intubation and six month in the PICU followed. It was a rough one, but he rallied, got stronger and came home. Then we had the seizure. That was a rough one. I was confident he would survive in the physical sense but was unsure what damage had been done. Now, as I see his sweet smile and constant "kiss lips," I know that my sweet boy is there. His body was ravaged by the seizure and he can barely move anymore but his spirit is good. It's a lesson to us all, never give up.

So, on this unexpected sixteenth birthday, my sweet boy won't be getting his license (I mean, really he's been driving since he was two), won't be preparing to go on any dates or to dances. My sweet boy is surviving. He is making his mark on the world, touching lives and hearts. He has made me a better person. Maybe his story has touched you, as well.

It is a life lesson. Don't let your circumstances determine who you can become. This sweet boy, who can't speak or move, has reached into so many lives and filled them with love and joy. That makes these birthdays worth it more than ever.
birthdays joy love