Boots on the ground... 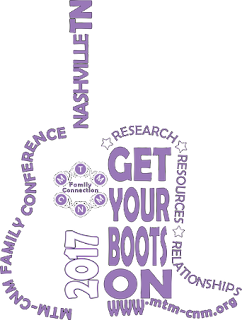 Today, as I surfed Facebook, I saw family after family on their way to Nashville, TN for the 2017 MTM-CNM Family Conference, an event that occurs every other year. Each of these families has a family member that is affected by Myotubular Myopathy or Centronuclear Myopathy. Javad has x-linked Myotubular Myopathy and was diagnosed when he was nearly two. When he was first diagnosed, I felt so alone. Everything on the Internet (remember this was 13 years ago), said his likelihood of survival was slim. I cried...and cried.

This was before Facebook, before many ways that we look at as natural ways to connect and communicate with others. At that time there were Yahoo groups and messenger. Somehow I found a group on Yahoo of parents (mostly moms) that had children affected by MTM. I would spend my nights chatting with other moms, sending a message then waiting at the computer for the response. Compared to today's technology it was almost torture but it was all we had. I bonded with these women. They became my friends, confidants, life line. They became the reason that I made it through those first few years. Each hospitalization was met with support, answers, and hope.

Finally, I had an opportunity to meet some of these amazing women and, over time, the idea to have a conference for families was born. The first conference, in Houston, was small but glorious. Meeting other families, recognizing the commonalities and the differences. Sitting next to boys that looked like they could be Javad's brother but also looked like their parents was the most amazing experience. Watching Javad interact was adorable as well. At this time, although the connections were priceless, the disappointing news is that there was no treatment or cure even on the horizon for this disease.

The next conference in Minneapolis was even better...more families came (oh, have I mentioned that the medical professionals and researchers come as well) and more connections were made. This pattern has continued for each conference following. Each year has grown, each year progress is being made toward a treatment. It seems amazing that we have come so far.

This is the first time in five conferences that I will not be there. I have been excited for 18 months, I have listened to the plans, looked at pictures and heard about who was planning to attend. I will miss so many things, hearing the researchers and the work they have been doing, but most of all seeing the families.

When you have a disease that is as rare as Myotubular Myopathy, you find family in others that share some of the same experiences. People that know what it is like to spend weeks, months, years in a hospital, be told that your child isn't going to make it. People who understand that fighting doctors is just part of the deal, standing up for what you know is right even if it contradicts what the medical professionals believe. These are people from the same tribe. This tribe is one you don't choose, you aren't inducted, just one day you give birth to a beautiful child affected by a rare disease and the tribe finds you, at least they try, and once they do, the support they try to give is priceless.

I am grateful to be in this tribe, grateful to find support and love, and support and love others. My son is 15, we have been down this road a long way. We have survived a great many of things and come out stronger. We've had our boots on but really wish that, this weekend, we were wearing them with everyone else.
#mtmcnmfamily familyconference mtmlove