The Healing Power of Water... 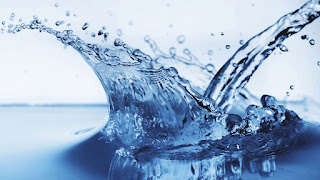 Water has always had a special place in my life. When I was young my step-dad, Ron, was a fisherman so we spent many of the summer months down at the coast. I grew up working as a deckhand helper next to my mother and eventually graduating to work as a deckhand on my own. Floating on the ocean, feeling the ocean breeze in my face, sprays of sea water covering my body and soaking my skin, cold hands baiting hooks, sharp knives slicing through the fish, cleaning out their innards and tossing into the ocean for the gulls to snap up.

Water has always been the place that I find my peace. I can sit on the beach for hours, stormy or sunny weather alike, the feel of the sand between my toes. Laying lakeside, hearing the surf lap against the shore, gentle sounds that repeat in rhythm.

It does not surprise me at all that this love of water was passed on to my sweetest boy. He used to take a bath in a horse trough when he was younger. It used to be an hour long affair, sometimes out on the back deck, sun beating down on him while the water lapped against his skin. For a boy who had limited mobility, the water gave him freedom, lightening the load of gravity so that he could freely move. Baths were one of his favorite times, feeling free for an hour at a time.

This was one of the hardest things to give up after the seizure. Bed baths became the norm, with the nurses carefully washing his skin, making sure that all parts were clean. Gentle hair washes massaging his scalp like a spa that he couldn't attend. Actual baths were becoming a thing of the past due to logistics, inability to move and now being dependent on the ventilator for his life breath. This seemed tragic to me, since his love of the water was so high, although he took it, like so many things, in stride.

Today we got to go to the therapy pool. The therapist, having known Javad since he was a very tiny boy, was willing to take the risk of putting a ventilator dependent child in the pool to see if his muscles would benefit. We carefully placed him in the chair that would carry him to the water. One could see on his face the cross between nervous and excitement, but as soon as his feet hit the water, he relaxed. Once in, his face filled with contentment, he floated in the water, gently moving his arms and legs. He showed off, the movements small but focused, his face determined with a tongue out to show concentration. This was a monumental moment. For the first time in over two years, he was able to freely move. The seizure, which scavenged his body, making it so that even the simplest movements are difficult, melted away for the moments in the pool. The smile on his face couldn't be mistaken for sheer joy. Although the movements were nothing like in the past, they were his.

My heart swelled watching his face and feeling his body, muscles tensing to move. I held him under his arms, kissing his face, confirming what I was seeing, praising each and every move. This is freedom for the first time in a long time. Water is amazing. It covers you with a warm blanket that softens your skin, and today, my heart. Water is powerful, with the strength to cut caverns in rocks, but today made a boy, who can't move on land, buoyant enough to feel the ripples of the water. The healing power of  water is far beyond what many of us believe. I know what it can do...I have felt it in my heart and soul and now I hope to watch it heal my son's heart and soul as well ,
healing water