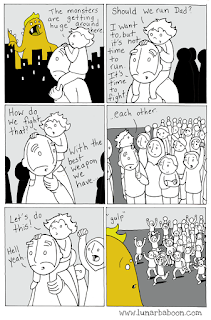 I laugh each day when I think about writing my nightly blog..."Who knew I would write a political blog?" I often say. I never have really been deeply interested in politics until this election cycle. Don't get me wrong, where policies have affected Javad and his medical care, where policies are impacting immigrants and refugees, both due to my personal connection as well as my school connection, I have been interested, and of course, anything impacting education has been on my radar, but mostly I feel that I am fighting a battle in the trenches daily and don't have extra time to fight with battles that are happening across the country.

Sadly, those battles are now infringing on the areas that I am most passionate about, my job, my students, my family, my son's health. Now, they are poking the bear. Anyone who has ever dealt with me regarding these topics will tell you that my passion and willingness to fight is pretty strong. I am unwilling to back down from a fight for the things I care about. I stand strong. My mother, who had her own issues in the area of mental health, did raise a strong and outspoken daughter. My father and his wife, who I consider my mom, also encouraged me to speak for myself. I am not afraid and sometimes get myself in trouble because I have overstepped. I am a good wrinkle smoother, but I will work tirelessly to make sure wrongs are set right.

This is where I am now. It is clear that there is so much turmoil in Washington that I am not sure we even know what is happening. We are constantly dodging events, hoping that we will survive the day. I find it ironic that the tone of the political podcasts I listen to has to mention the caveat, "this was recorded at 3pm eastern. Things may have changed by the time you listen to this." Things may have changed...that is because there is a man who is wielding a pen like a sword to cut down all people and things that seem to have ever bothered him with no sense of thought at how it might impact the greater world.

The only way we are going to make it through this time is to band together. The political divide is great. Most republicans are "standing by their man" until I imagine his behavior is so irrational and erratic that even they can't stomach his actions. Most democrats are just hoping for defectors so that some of the craziness can be stopped. I realize that I have friends across the aisle and some may feel that my outspoken feelings about those in Trump-land are out of line, but frankly I am frightened. I have been concerned since the election and I never even imagined that in two weeks so much damage could been done.

Trump-land is filled with friends and cronies from the billionaire world. Friends and family are serving alongside a few others of the meager man variety. People that have virtually no experience but have donated a lot of money are being given powers beyond imagine. It is almost like all the rich have arrived at a party and instead of giving party bags, they are being given cabinet or other high ranking positions as their reward for attending. It doesn't seem to matter if they actually know what they are doing...as long as they receive the shiny medal and office saying that they're important.

Trump-land is teeming with family and friends. From a daughter that is serving as a surrogate First Lady, from a First Lady that has been essentially absent, a son-in-law that is the close advisor and let's not forget about the extreme right wing friend that is now a permanent member of the National Security Council. I mean...what could go wrong, right?

Sure it all seems on the up and up. Congress Democrats are preparing for a massive battle. Essentially we are in the fight for our democracy. It is a surreal and strange to me. I am not sure how many times people have said they feel like this is the twilight zone. I am not sure it will be rewired to bring us back to reality, but I know that we will have to do it together. We have woken up as a country and realized that we have been complacent. We can be complacent no more, but it will take more than one. It will take us all making a stand.