The acting Attorney General, Sally Yates, told Justice Department lawyers not to defend the Executive Orders on Immigration restrictions recently signed by those in Trump-land. Sally stood up to the bully behavior that has been thrown about in Washington. She acted as a warrior for those who were being abused. 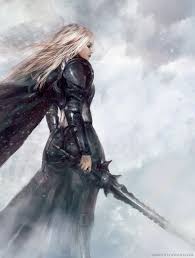 Last week a universal ban on refugees was signed by Executive Order. Refugees that have been fully vetted and were waiting in their country of origin. Some were already on the plane on the way to the United States while others were told upon arrival. Those with visas, work permits, even green cards were held in airports around the country or put on a plane back to the country where they started.

Attorneys were camping out in airports and representing refugees, pro bono, computers on their laps, sitting on the floor. They were working in teams connecting with families who were desperately trying to get information about loved ones being detained and doing their best to get them released.

Another woman, on Saturday, a Federal Judge, Ann Donnelly, blocked this order, temporarily lifting the ban on refugees, allowing them to enter the country over the weekend, Families, whose loved ones weren't already on a return plane, were reunited, a breath of air felt. This woman stood...tall and brave, against all who would be angry, for justice.

Women are the foundation of society. Regardless of what men want to say, women are the ones that hold families together, provide stability, are the glue. Women bear the children, provide direction. Not saying that men don't contribute, that would be far from the truth, but women have a very different role, both personally and in society as a whole.

Often overlooked and underestimated, women fly under the radar, providing support and guidance. Women are smart and savvy, often finding themselves in the center of the firestorm, problem solving and putting out the flames. Women have been the center in the last few days. A man, who is driven by his ego, frustrated about votes, and what others think, is waving his lethal pen in the air, signing frightening order one after another, then messaging to the world about it. has been slowed down by women. First a judge, then an attorney.

Women need to continue to stand, when one falls, another takes her place, constantly reminding the waving pen, that these decisions will not stand. We will not sit down and pretend that it is okay.
We will not look at our neighbors and turn on them, sending them to a life that is frightening and dangerous. We will not condemn children to bombs and shooting, and poverty so devastating that lives are in danger.


A woman stood today...and we need to continue, until the lethal pen has been silenced.
pen standing women