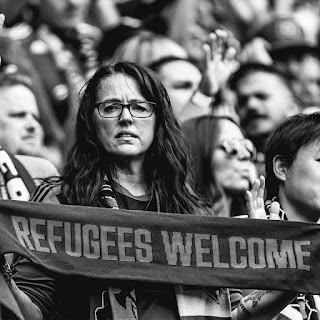 I teach at a high school of 2,800 students, small by some state standards, but large for Oregon. Each year we "compete" for the 'biggest school award' with a neighboring high school. I have been teaching in this district for seventeen years and in these seventeen years our district has gone from a mostly white middle class district to one that has welcomed hundreds of refugee families, families that have been pushed from their homes in other areas of Portland due to gentrification, and families seeking affordable housing. A district that has changed from one with less than twenty-four percent non-white to a diverse population of more than seventy-four percent non-white where over fifty languges are spoken. Every day students enter our school who have recently entered the country, many from Africa, Myanmar, Iran, and Iraq. These students have seen and experienced things that no child should. Violence against themselves or their family, packing quickly and fleeing during the night, living in a refugee camp, each day filled with getting water, food, and other basic needs. Arriving in the US was a breath of fresh air, hope for a new life, hope for peace, hope for something to build on.

The new ban on Refugees is like a giant slap in the face not only because it is threatening families that have already been promised entry to the United States, but also green card holders who are residents of the US. These people, who have already waited, filled out paperwork, been vetted, are being stopped at airports and detained. Students who are returning from visiting family over the holidays, businessmen and women who are out of the country on business, families who were put on a plane ready to start their new life, only to be either put in jail or back on a plane to the country they just left.

We, as a country, seem to have lost perspective. We are now focusing on those of the Muslim religion and blaming them for all...if we look at the damage Christians have done over time, this is far greater. Instead of looking for the good, we are building a white america, rolling back years and years of work done. Civil rights and human rights seems to be dispensible now. We, as a society, seem to feel that we don't have to be kind, welcoming, or even humane. We are turning our back on those who need us the most. We are talking about spending billions of dollars on a wall rather than focusing on poverty and homelessness. We have lost our way.

Long ago, our ancestors seemed to understand that the United States was a melting pot where many colors and religions made us cuturally rich and socially stronger. The interactions between cultures gave us an appreciation for others and a willingness to reach toward those who brought something different to mix.

Let's remember what we used to stand for and go back to these sentiments. I know that I am...

“Give me your tired, your poor,
Your huddled masses yearning to breathe free,
The wretched refuse of your teeming shore.
Send these, the homeless, tempest-tossed, to me:
I lift my lamp beside the golden door.”

The resitance is happening...the movement is real. We must stand for those who need us because if we don't, we will all lose.
hope huddled masses refugees resist