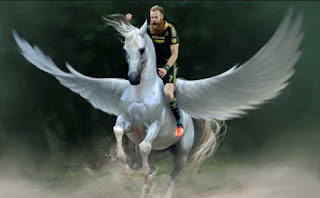 Let's just start this out with the fact that I love soccer...love it. Although I didn't play as a youth, I began playing as an adult and totally found a niche. Although I don't play anymore, I love to watch it.

Today, the Portland Timbers won the Western Conference and are on to the MLS Cup. This is the big one, the one for all the bragging rights. Next Sunday, they fly to Columbus, Ohio and win their first championship.

There have been many times during the season where this did not seem possible...many times when we were barely at the redline or above the redline, but then something happened. Maybe it was the third kits, the retro green and gold that I fell in love with the first time I saw them, maybe it was the Timbers Army, the fan base that is so incredible in Portland that people talk about them around the world, or maybe it was that the Timbers are just a second half of the season team, but I believe that it is more than that...it's passion and desire.

When you want something, really want it, and create a space in your universe that it is already true, then it will happen. You talk into your future as if it is already real...we do this exercise during Challenge Day, helping students see their future as a viable thing that they just haven't arrived at yet.

That is what happened with the Timbers...thousands of fans, and the players themselves, believed...believed that at the end of the season, they would be holding the Cup over their heads, champions.

That is how life needs to be...believing what you want to have and making it true. By speaking into your future, saying what it is that you see, you can make it happen. This is what the Timbers are teaching me this season...to reach out and take what you want, don't sit back and wait, playing the easy game isn't the one worth playing, finally, never stop believing, never lose your passion...keep the fire alive...because that is what makes it all worth it...holding your championship cup over your head and declaring, "I did it!"