Thoughts about the day that the US changed...reflections on 9-11... 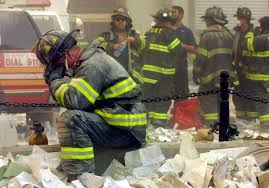 I supposed that my experience with 9-11 is similar to anyone else who has lived through a major event.  These events, when you watch in horror...living each and every moment, etching it into your memory. Previous to this moment, some of the most impactful had been the day the Space Shuttle exploded with Christa McAuliffe, a teacher determined to change the world and Columbine, a school shooting beyond imagination. On both of those days, I sat horrified as I watched the television...unsure of what was happening in our world..the Space Shuttle being a random event, while Columbine was far more sinister.

Then, I woke up fourteen years ago...It was the beginning of the school year. I was in my second year in my current district and hugely pregnant with the cutest boy. School started later in the morning then, so I was blissfully sleeping in when I rolled over to see the first plane hit. I was so confused, thinking my husband was watching some kind of bizarre movie, only to watch in horror as the second plane hit.

With an incredible, horrifying realization, I knew the world was changing in front of my eyes. Everything that was being said about those responsible, for the events unfolding, was that the men were Muslim, from the Middle East. I looked at my husband...my Persian husband, and felt a deep pain in my stomach. This child, the one that would be born just six weeks later, was biracial...half Persian.

Granted, Persians weren't responsible, but craziness began right away. Fear began driving people to do horrifying things in defense of our country and out of anger that our collective innocence was gone. Many American Muslims were being harassed, brutalized, even killed. My father-in-law had recently passed away and my husband would be getting on a plane to return to Iran for the service...my husband, the non-citizen. I was terrified.

So many things changed that day...trust was broken, fear was instilled, the loss of faith in others. Airports became much stricter and people became suspicious if you looked different. Some parts of the world became kinder...many in the world embraced the US, sending them messages of love and support. A small piece of America's broken heart was healed.

I can't say, fourteen years later, that our world is healed. I feel like hatred, in many ways, went from isolated, to so much bigger. It was a lack of understanding that made no understanding...frightening in many ways. I think about my students, ones that I have come to love and adore, who came from one of these counties and wonder how we bring dialogue around understanding for others and cooperation...I hope that this is true!

I know I am just one, but now fourteen years later, we are ripe for something new. It is time to heal our collective heart. If we don't, we will not build a world of peace for the next generation and, frankly, this is the only way we will move past, never forgetting but not perseverating.

We have the power and technology to figure this out...I have faith that we will do this...maybe not now, we're all too tired, but later, when the world seems like it might have just one more idea...you should probably run with it. After all, we owe it to our children and our children's children that we remember this day...the day America changed, the day our collective heart was shattered into a  million pieces, but this is more that just remembering. We must act, remember that togehter we make something amazing and be committed to it...committed to making it happen!