Javad the Giraffe: Our Journey this past week 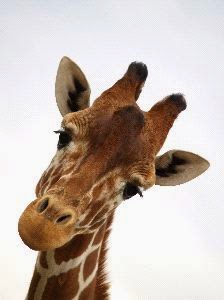 This has been quite a week with the boy, one that can't end soon enough. As I sit here, thinking about what to write, I remember a blog I wrote years ago about the littlest boy and the giraffe. Javad is like the giraffe in many ways...gentle, peaceful, and highly prized. Like the giraffe, he is a unique creature, who is like no other. The giraffe communicates primarily in a non-verbal fashion, much like our boy. I was looking forward to spending our week, Spring Break, by going to the zoo, or the park, but Javad had other plans.

On Monday evening, Javad had an episode at home. He was unresponsive and David and Simon called 911. This is a first at our house, which tells the level of concern. The EMT's came and Javad required CPR. They figure he was down for four minutes, not a long time in medical circles, but to a father and brother (and uncle, aunt, grandmother, and mother on the phone), CPR for four minutes was an eternity. Once called, I began my journey home (speeding on the freeway, deep breathing, and doing some serious positive thinking) from a meeting at school. I met the ambulance at the hospital and our week began.

Javad was admitted into the PICU at Randall Children's Hospital. This is our first visit to the PICU since Randall was built. We have many friends at this hospital and, frankly, no one was thrilled to see us. The medical protocol after cardiac arrest for any child is to cool them. So, for forty-eight hours they made our sweet boy a Javad-sicle. After 48 hours (and 33.4 degrees celsius) of cooling, Javad was finally to be warmed. It was difficult to see our sweet boy so cold and still.

During the cooling phase, Javad was hooked to an EEG. It was determined that he was having electrographic seizures which were not present externally, but definitely were happening. We will never know if the original episode was caused by a seizure or of it was some kind of plug....regardless, this is where we are now.

While cooled, Javad was placed on an anti-seizure medicine to try to calm the brain waves (which I have now learned much about!) and, again, although not showing outward signs, his brain was having a heyday. A second medication was prescribed and the combination seemed to calm his brain, finally giving us some peace that things were moving in the right direction. It took them 14 hours to warm him (well, really, for him to thaw) and then tests were ordered to check his brain. A CT scan showed no swelling and it was determined that at this time he can't have an MRI due to his hardware in his back (we can't get it cleared yet). With this information, we begin to move forward.

It looks like we'll be spending our Spring Break here...a little different than expected. The meds make him tired and now we wait. Everything looks good...his numbers are great and we are starting to see small signs of our boy. It will take time for him to adjust to the meds and for them to find the right balance. Like so many times in the life of this boy, we relish the small signs. Oh..did I mention for good measure he is also growing his three favorite bacteria...(sigh).

I am confident that we are going to come out okay on the other side of this. We have been down so many difficult roads, I just don't believe that this one is the one where dramatic change happens. I am not naive, though, and I know that we are in for a long recovery...This is a marathon, not a sprint, but our boy has come through so many other marathons he is fine tuned and fit.

Being the parent of a MTM child means never knowing...but I do know one thing...our boy is a fighter. He has managed to come through so many situations that were unexpected. I told the doctors yesterday that if I took to heart all the bad news I have heard in thirteen years, I would never get out of bed. This is a bump in our road, a little wandering off the path to see another part of the road we have not visited before. I'm going to admit that I was not prepared for this adventure, but we are here together...we love each other, and dang it, the boy is so cute.

I am one who continually believes in the strength of my son and his spirit, but there is a medicine dance performed by the San people of South Africa called the Giraffe Dance which is performed to treat head ailments. I'm not going to lie....I would like them to perform it for my boy...this boy who loves giraffes and seems to be drawn by their strength and spirit.

Here we are, ready for this next part of the journey...the spirit of the giraffe with us, channeling it's strength and peace.
giraffes journey of life littlest