Down the Rabbit Hole...

August 14, 2014
The loss of the comedic icon Robin Williams this week has brought about much conversation around the subject of depression and other types of mental illness. Today it was released that he may have been suffering from early Parkinson's Disease. 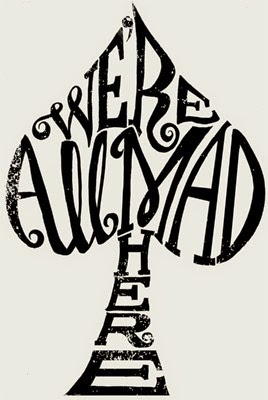 Sometimes it takes someone who seems to have it all, the riches, the life, the connections, to bring forth the ideas of mental illness. Some people don't like to use the phrase "mental illness" when talking about depression or similar issues, but the reality is that they are mental illnesses, they are wired in the brain and professional help is often needed to find some level of relief or resolve.

I, myself, have struggled in this arena. When my daughter was young, I was in a pit of despair. I took medication that gave some relief, but realistically it did not pull me from the dark place. Those years were rough...I feel bad for my daughter, looking back, I was not able to give her more of myself. My memory is a bit like swiss cheese from that time...I met a man that I fell in love with, but was unable to maintain the relationship due to my deep inability to care for myself on an emotional level. My despair actually caused me to leave the man, leave my job, and return home where I could try to dig myself out of the deep hole I was in. I was off medication, determined to heal myself without chemicals, which I was (somewhat) able to do. I found a place where I was stable, moved out on my own again, eventually meeting the man I would marry.

When my daughter was a teenager she had panic attacks. I underestimated the impact of these on her at the time, wondering why she couldn't just manage. Years later, after the littlest was born and I began having uncontrollable anxiety attacks, which included panic attacks, I felt bad that I had diminished their impact.

Being the mother of the littlest has given me an entire new perspective on mental health. When he was a baby, ironically, I wasn't anxious. I believe it was being busy and being overwhelmingly positive about his outcome kept me from being too concerned, but when we almost lost him when he was two, the panic attacks began. I was attending school full time, working full time, and trying to be a full time parent...something triggered it. I have been told that it can be like that...one day, it rears its ugly head. I tried to keep them hidden, staving away the attacks when they came on, but finally, one day, they began to take on a life of their own...I was breathing through each class period, focusing on making it to the end of each day. I finally went to the doctor for medication....it had become a full time job (on top of my full time job) just to manage.

Here I am years later, keeping just on the edge of sanity. I know how important it is to manage my anxiety, for myself, my family and my students. I am reminded, by the events of the week, how much any sort of mental illness is underplayed, that these issues are "all in the head"...many think that it's possible to fix it, pull oneself up by the bootstraps, drink less caffeine, do more yoga.

The reality is that it can be managed, sometimes through medication, yoga, meditation, naturopathic medicine, but it never goes away. It's always there, a ball in the bit of the stomach or a black curtain right behind the eyes. The goal is that it doesn't tip the balance, become greater than you are, overtaking the ability to live.

Those on the outside looking in need to support, be there, let those they love know there is no judgement. When you are in the bad place, in the thick of it, there is no logic, no way to express what is needed so...don't ask. Just tell them that whatever they need, you will be it, silence or noise, you will be it, closeness or distance, you will feel it...whatever they need...that is you.

When the light is so dim that it's hard to see or the world is spinning so fast that it feels like you might fall off, just be there to be the flashlight, be the cushion. When their heart feels like it might explode or their body is so heavy they can't move, be there...be there to calm, to soothe, to cuddle or sit far away providing support from afar.

Mental illness is real, it can be devastating, it can attack the young and the old. Education and acceptance is so important. Understanding and a willingness to learn.

My hope is that Robin William's death brings about a whole new round of understanding and awareness. It is a silent group of diseases and it is time for them to be out in the open, with nothing but support attached. It is beyond time.
anxiety depression madness Robin Williams