August 05, 2013
A horseback ride today with family enlightened me with the unexpected...Cowboy Etiquitte.
Our group arrived at the trailhead met by two genuine cowboys...WC and Greg. Men who were weathered by years in the elements on horseback, face and hands leathery from the sun. WC, with bowed legs and a singular tooth in the front, grinned with eyes twinkling, as he gave instructions on how to ride to the family. Instructions that were rapidly translated into Swiss for the children, making Greg smile as small heads bobbed with eyes wide with excitement.
Once it was established that the Swiss cousins had virtually no experience riding, the task of saddling up was at hand. Experienced riders such as myself, my father, sister, and niece, were given horses that were bigger, more challenging or inexperienced, while the Swiss cousins were given horses that would follow others easily and give little trouble.
Once saddled up and moving along the trailhead, a woman was heard yelling about moving a horse trailer. WC returned to deal with this competitor and returned shortly with my first piece of cowboy etiquette knowledge: "If there are no trailers in the parking area, you can park two but if there is one trailer then you can only park one."
This piece of knowledge was a bone of contention between WC and his competition, but the older weathered man held out and returned shortly leaving his competition in unsatisfied with the result.
My second piece of Cowboy Etiquitte was given on our journey back to the trailhead. As we were riding along, WC yelled up to Greg that if the group were to meet us on the trail, we were to concede the trail and take the high road. When asked if this was to appease the other group and their guide he stated, "They are at the beginning of their ride while we are finishing ours. Because we are almost finished we relinquish the trail to them and take the high road."
It seems that there is something that can be learned from Cowboy Etiquitte. Only take the space you need, enjoy the outdoors, honor the land, and don't forget when it's best to take the high road. 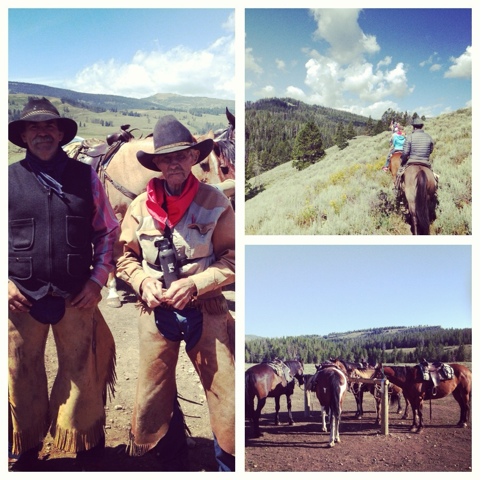