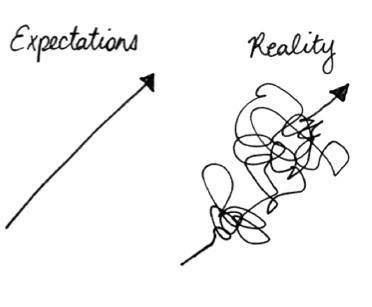 Life is never what it seems...reading the titles of seminars in brochures can be a mixed bag. Sometimes the seminar that you get is far beyond what you could have imagined, while other times what you get is so much less than you ever thought possible. How is it that there is this complex dilemma regarding expectations? How is it that the reality of life can either far exceed (or be far more underwhelming) than one thought possible? You never know whether to expect triumph or tragedy...an ebb or flow. It's like coming to the table expecting the grandest feast and instead being served gruel and moldy bread. Where is the equity?

Expectations versus reality can be a difficult space to have in your brain. Wanting to be realistic about the expectations that are possible while not being defeated about what reality is serving up. Seeing ahead and knowing what the end game is, but being confronted with a winding maze with dead ends and obstacles not mentioned beforehand. The strong put on their armor and head out, unwilling to be defeated by the pitfalls that are presented before them, hoping to have their entire crew surviving to the end, while the weak stand at the beginning, looking at the map, hoping for accuracy, praying for safety, letting others go ahead and relishing their failure as a stepping stone to their own success.

Expectations versus reality rarely are parallel...expectations are clean and shiny, straight as an arrow to the end result while reality is often twisted and cluttered, filled with turns and trials. The end result may be the same, but the journey feels entirely different. One leaves you invigorated and ready while the other exhausted and beaten. Finding the place where the two can intersect is where true harmony lies. This place is no where on the map and only the persistent and occasionally lucky, reach this place of Nirvana where their hearts and souls can be filled and their spirits refreshed.
expectations reality