One in Seven billion... 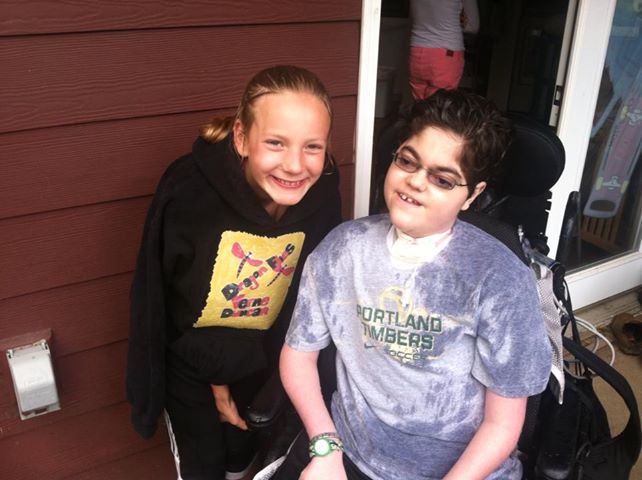 Today I went and watched a softball game...seems like an occurrence that isn't that important, but it was a reminder of the things that I will never experience with my sweetest boy. Our life does not involve baseball or soccer, but rather Blue's Clues, Teenage Mutant Ninja Turtles, computer games, chess and MadTV. I am not bitter or angry...I am lucky, my son is lucky...he met the right girl already...she is one in seven billion.

We joke about the wedding and they are dating...I mean..let's be real, they are in the fourth grade. What makes her special is that she has a quality that so many lack...she accepts him for who he is. She isn't bothered that he is in a wheelchair or that he doesn't talk. She doesn't care that he can't do so many things that she can...she is happy with what he brings to their table. She worries about him when he's sick, sends stacks of drawings and notes home with the nurses to remind him that he is missed, beams a smile when she sees him, she meets him where he is at and isn't angry that he doesn't have more to give because what he gives to her is enough...she knows that he gives everything he has.

We could all learn a lesson from this girl. She, at a young age, has already learned, or maybe just inherently knew, what so many of us need to learn. When we meet someone, we can't expect anything. We have no idea what skills or ideas they bring. We just have to be happy to meet them and take them where they are at. Don't expect more, don't find them lacking...just come to them as equals. Don't expect them to be something they aren't (or may not even be able) to be. Be excited with what they offer and grateful that your lives have crossed paths. Be humble.

Take it from the cutest and greatest blond my son knows...we can find something special in each person we meet. Sometimes we may have to be patient, but they will reveal themselves to us. You never know...they may become your own one in seven billion, a special kind of friend to you!
Awesome girl meet where you're at