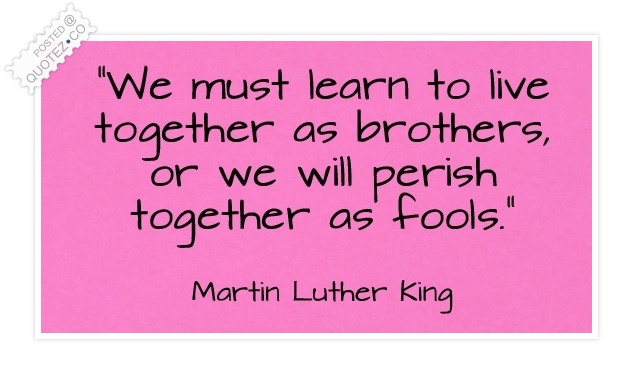 I had an epiphany tonight...one after a frustrating day. I am frustrated that I am counting with glee, like one of the kids, as to how many days we have left...Two more...My epiphany, really, had nothing to do with the countdown, but rather the frustration. I realized that although people need to work together as a team, that does not really mean they have to like one another.

We must learn to live with one another. I joke that there used to be a time when we were better about ignoring one another, when we could be civil, and not necessarily a fan. I have worked many jobs during my lifetime and the number one thing is that you must have decorum, some element of service. Even if your co-worker is someone you would not hang out with after hours, you need to find it within you to be polite. That is what it means to be a professional.

I feel like I have lost a bit of that these past weeks. I have been unable to separate my inner being, the child crying out for justice and wanting to throw others to the side, and the adult who recognizes an inability to control things and must be polite. With two days left, it is getting harder and harder. There is a level of crazytown that I didn't believe possible (I guess that says, never say impossible). I want to walk away and not come back until after the summer. It is taking every fiber in my being to not lose my mind.

I have been vulnerable (annoyingly so), and have lost my temper (irritatingly true), but now I need to step back and recognize that...if we don't find some common ground...all will be destroyed..perhaps forever. To watch something that has been built with hard work, go down in flames, would be horrible...I want to throw water on the fire and cross my fingers that the damage can stop.

If we don't work together to stop the damage, things will forever be lost. The only place to start would be anew. I am not sure I am ready for that...it sounds exhausting and overwhelming...

Many companies require teamwork and professionalism although what they don't require is friendship. I am ready (really...I am this time!) to move forward...I can be a part of a team...as long as it's a team, and I can be professional. I will save my true friendship for those who have shown without a doubt that they deserve it..and that sounds like a place to start...