The Beauty of the Team... 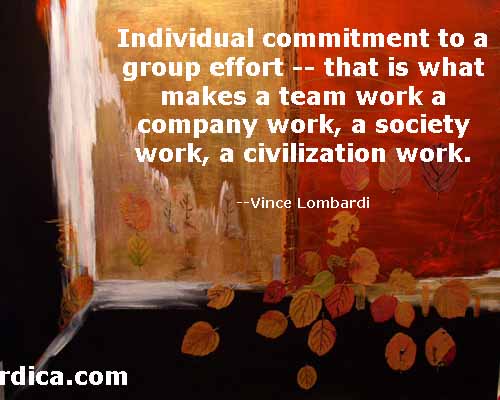 School is comprised of teams...teams of students, teams of teachers, teams of administrators. Schools cannot function properly without the concept of team. Now, don't get me wrong, the organization could actually function without teams, but for it truly to be an organization that makes a difference in the lives of both children and adults, there must be the concept of teams.

The purpose of a team is to work together with a common goal or purpose that all members agree on with mutual accountability. Each member of the team has specific skills which enhance the performance of the entire team.

One of the key elements of a team is that since all members have agreed on a mutual purpose, they also agree that there is no blame to be distributed. Each member is valuable and brings something to the table. Fair and constructive criticism can be offered, but is considered to be used to enhance the individual's performance and thus the team's performance as well.

When I look upon the dysfunction of my current place of work, I realize that one of the glaring issues is that there aren't many functioning teams in the sense described above. Children, of this day and age, have difficulties working in teams. It is a skill that must be taught. Ironically, they can work in teams while playing Halo or any other video games, but live and in person, it can be a challenge. They struggle to let others take turns, are often not sure how to find a common purpose, and the concept of no blame is often beyond them.

Many adults also cannot work as a functioning team. The idea that there could be mutual agreement on a goal and not a single identified leader is often a struggle. Each team member, not only agreeing to, but also completing a desired work load is often a struggle. Often the lion's share of the work is completed by a small portion of the members, thus breeding annoyance and discontent. In order for teams to be solidly founded and functioning, training on how to work together, instead of against one another, must be provided, similar to training provided to students.

The idea that if one wins, we all win, is often not one that is usually celebrated in the United States. Unlike many asian cultures where the group win is often more valuable than the individual win, US workers are more likely to thrown one another under the bus so they can be declared the "winner."

Education, to be truly successful, must go back to embracing and celebrating the idea of the team. Throw out the concept of "each man for themselves" and, instead, recognize that where one is strong, many are stronger. In times of weakness, we must carry one another on our backs so that we may reach maximum success. This is the concept, and beauty, of team...