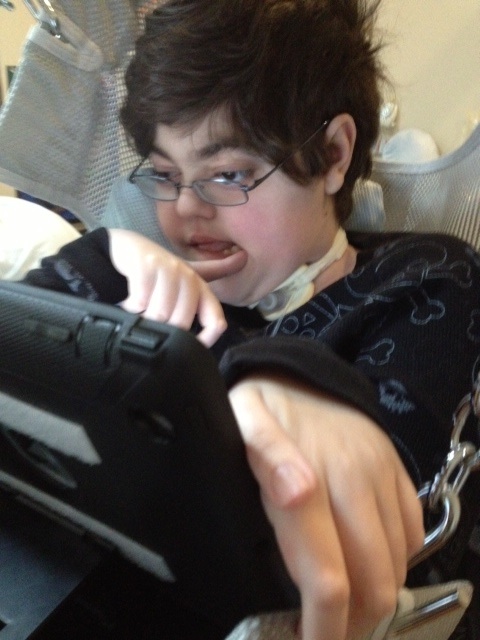 The x-chromosome...it's strange to think how this one piece of genetic DNA, which determines my gender, would become an area of such controversy in my life.

When my sweetest boy was born, there was clearly an issue. I have talked about this before...if you don't know about my sweetest boy, you might read the The MD of Me..., which gives some much needed background! Anyway, when the sweetest boy was diagnosed with Myotubular Myopathy at age 2, I knew we were in the right place, but since then there have been varying degrees of questioning and agony...after all, I gave him this disease...it is X-linked, from me, his mother.

For years, I have joked that my brother was our mother's favorite because she gave him the good X. I have struggled, wondering if I had given my daughter the bad X. It seems that the last nine years has been all about the X. The X-chromosome, it holds mysteries beyond belief...color-blindness, hemophilia, Duchenne's Muscular Dystrophy...and MTM. I have carried guilt and sorrow. My daughter has struggled, although not planning on children now, what would her plan be in the future? She loves her brother, but it has been difficult and the realities of life expectancy are sometimes crushing. This year, we were planning on having testing done (again!). It would be the third time...the first time technology hadn't caught up with the disease, the second we thought we had found the mutation, so this was to determine whether or not she was a carrier, and whether I was too.

Then...I re-read the form from three years ago...No Known Mutation. What??? How did I miss that memo? He definitely has MTM, but it is not likely carried on the X-chromosome. That means that I am not a carrier, neither is my daughter...Yay!! But wait...what does that mean? That means that treatments developed for X-linked boys will not be available to him...that means we may never know what flows in his genetic make-up. That means it was random...

Random...years of studying Genetics in college and years of having this sweetest boy didn't prepare me for this...an answer that doesn't give an answer. Well, it doesn't mean we love him less or that he is any less cute...it just means, that like the last 11 years, he will continue to remain a mystery and, it's not about the X...it just is about him...