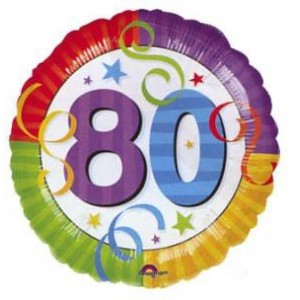 Today is officially my 80th day blogging in a row. I know...UNBELIEVABLE!!! What began as a challenge to myself to let my mind quiet has now become in integral part of my day (or rather night) that I look forward to! I feel that writing every day has helped me grow as a writer and as a person. So for today...I wanted to share with you...the power of 80!

In Math, 80 is a semiperfect number which means that it is the sum of all of its own proper divisors.

In Science, 80 is the atomic number of Mercury and atomic weight of Bromine. Mercury and Bromine are the only metals that are liquids at standard conditions for temperature and pressure. (cool!)

In Religion, Moses was 80 when he spoke to the Pharaoh and is the upper limit for a cardinal to participate in the papal election.

In Numerology, 80 is considered to be the highest feminine number and the number of a natural leader. The Tarot Card of the number 80 is the card of strength. The Destiny number 80 see a bigger picture with a higher perspective. (think giraffes)

The following words total 80 in Numerology...Infinite Eternal and One Spirit Breath. (Sigh...love those words!)

In the 80's some powerful music legends emerged, Michael Jackson, Madonna, and Whitney Houston. (My first concert, Rick Springfield, was in the 80's.)

Mt. St. Helen erupted in the 1980 (covering my lawn with two inches of ash.) The (first) Royal Wedding was watched by millions in 1981. ET came out in 1982 (and I bawled my eyes out because I just gotten in a fight with my mom...another story!), the Space Shuttle Challenger exploded in 1986 (holding Christa McAulife, a teacher), the Berlin Wall fell in 1989 as well as students from Tiananmen Square were slaughtered.

I am proud that I have been writing for 80 days...My goal is to continue to write each and every day...I have much to say, after all, so I guess we will have another one of these check-in's in 80 more days...June 16...I'm sure there is significance to the number 160...looking forward to researching to find out..SEE YOU THEN!! Happy 80!