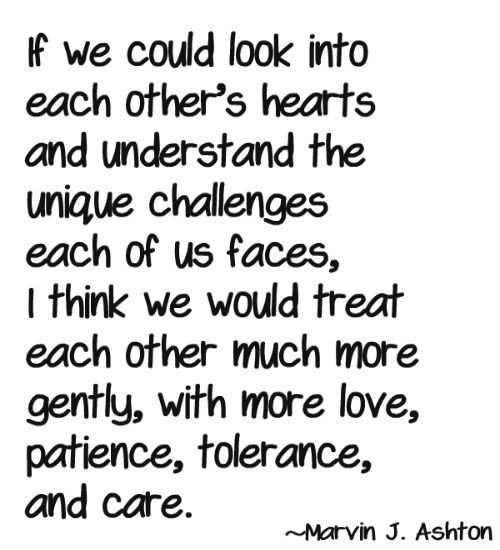 When we are with others, we show our outer shell. Imagine that each one of us is like an M&M candy with a hard shell on the outside and chocolate inside. Some of us have almonds, peanuts, pretzels, even mint inside. When we are around others, we show that outer shell. It is rare to get below that first (or let's say that the chocolate is double layer) or second layer and down to the true center of things. We keep those portions of us private...what we don't show are those deep and inner parts, sometimes it is because of fear, sometimes shame.

Sometimes I wish that we were all like Superman with x-ray vision and were able to see the pain that others harbor. I think if we were able to really see people for who and what they are, we might be more willing to treat them with kindness.

I think about earlier this year, a friend had been acting strangely. It was sad and frustrating because the person that I had known and come to respect had seemingly taken a 180 with their behavior. I mourned the loss of someone I had respected until I found out that a very important relationship in their life had recently disintegrated, suddenly. Almost instantly, I had a new sense of understanding. This person, whom I admired and respected, had been acting out of pain and hurt. Now that some healing has taken place, they have moved forward and have returned to be more like the person they were before.

So many people in life are filled with pain but many times it is buried deep so that no one can see. We all cover our pain in different ways, some through hard work, some through comedy, some through withdrawal. We thicken the shell around us so it becomes harder and harder to get through. It can be easy, in this world, to hide. People aren't connected the way they used to be...the sense of community has dwindled. Community and the sense of belonging is so important. With the love and support of others around us, we don't feel that we need to keep all the walls as high. Somewhere in our lives, we need to be able to let go, let down the shield, open the hardened shell that surrounds us. Once we have begun to reveal our true inner self, the work actually eases. It is hard to hold it all together all the time...the effort that is put into keeping the outer shell intact, without nicks or cracks can be exhausting.

We have become a society where have deep relationships have become unimportant. The time of the instant friendship based on little common ground is becoming more and more common. This is a Facebook world where we can have thousands of "friends" that we overshare with or a Twitter world where we can sum things up in 140 characters. Instead of friendships being built and reinforced over time, they have become disposable where one outer shell is shed and the next is waiting for us to pick up. New shell, new personality, new friends.

I want to return to the time where friendships are deep and have substance. People that you can call on at any time, who would drop all things if need be. I want to work in a place where we can expose our true inner selves and not be judged or criticized, but supported.  We all have times in our lives when life seems overwhelming and we are struggling. At those times we should be allowed and encouraged to open our shell, let people see, so they can treat us with the kindness and caring we need.

Our world needs healing...children are growing up in a place where they are encouraged to have shallow relationships. Dating can be done almost through texts alone. The sense of knowing someone, truly knowing them is a thing of the past. I want my children to be part of a place where relationships aren't disposable, where hard work over the rough patches are seen as necessary and the transparency of personal self is considered a priority.

I want to be in a world where, like M&M's, we shed our chocolate shell and reveal our inner wonderfulness...no melting required.