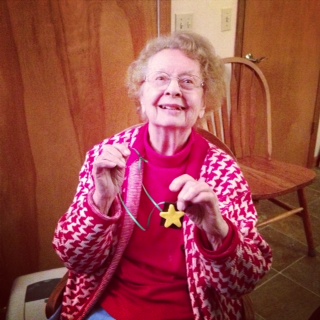 My grandmother is one of the most incredible people on the earth. I know that my birth was a special one, after all I was the first grandchild, the first girl (after three sons), and, from what she says, she fell in love with me at first sight.

From the beginning she was a special part of my life. My dad and I lived across the street from my grandparents in the years that I lived with him and I spent a great deal of time with her. When I was about four years old, I went back to my mother and then the craziness began.

During these years of my youth when my life was the beginning of crazy town I always knew that my Grama stood for me. She was my greatest advocate from the beginning. She began picking me up for Youth Group on Wednesdays when I was in kindergarten and continued until my senior year. I learned to drive in her car and looked forward to these weekly meetings as a foundational base for my youth and teen life.

Every Wednesday, when she picked me up, we would go to dinner, usually at Burger King or the like, and then we would go to the store and I usually got some kind of small toy (or a comic book). Sometimes we would go to the park or play somewhere indoors if the weather was poor. One of the greatest things she did was have a standing invitation open for me to invite a friend. Many weeks she would pick my friend (of the week) and I up, take us both to a meal and a toy. She was equal opportunity and my friend would always be treated the same as I did on these special girls afternoons. These Wednesday's were special, occasionally my Grampa came too, but most Wednesday's it was just my Grama and I.

Once during my younger years, I didn't want to go home to my mother's house. My Grama had me call my mother from church (although my mother told me that I had to come home) and my grandparents took me home crying. I remember my Grama telling me to to stay in the car while she went in to talk to my mother and, years later, I found out that she had told my mother that she needed to get her act together and take better care of me. My mother respected and loved my Grama until the day she died. I believe that my Grama's willingness to stand up to my mother earned her respect.

My grandmother, a quiet woman, with incredibly strong faith, is a Quaker woman who was married to her college sweetheart for 70 years. She has always been one to whom you could talk about anything, even if the topic was difficult, and the words you spoke were kept secret in the vault of her mind. She offers guidance, love, and most of all, non-judgement. One would think a woman who grew up during the Depression, in a conservative time, might not be so progressive, but my grandmother was the one who taught me I could do anything, who held me when I cried, who told me things would be alright. She loved me through the hurt, helped me make better choices, talked me through the rough decisions.

When my youngest son was born, she and my grandfather would faithfully come to the hospital to sit with him so I could go to work. At 85 and 83, Grampa would drive them to the hospital ("Honey, what else do we have to do?") and she would hold my youngest's hand, sing to him, pray with him and for him, and love him with all her heart. My youngest was "Grampa's Big Boy" from the day he was born and they never lost faith, never believed that he wouldn't make it, and, if they did, they never acted like they believed anything different than a long and wonderful life.  I believe that their strength also helped to keep him alive. My Grama was never afraid to hold him with all the wires attached, a small and frightfully sick little boy. He loves her in a way that is unmatched by others.

I am lucky and I thank my lucky stars every day that this woman is a part of my life. I am not sure what will happen when her time comes. I am still reeling from the sudden loss of my Grampa two years ago. I know that people don't live forever, but I have made one simple request of the one with more power than I...more than anything I request that she forever remain here with me...if not here with me physically I know that she will remain forever in my heart.